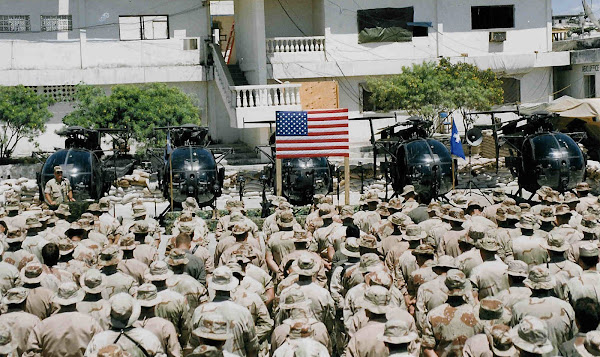 I would like to pay honor and respect to the fallen warriors from the Battle of Mogadishu, which took place roughly 29 years ago.

On October 3, 1993 in Mogadishu, Somalia, US troops conducted a raid to capture two lieutenants of Mohammed Farah Aidid (head of the Somali National Alliance). This raid ended up becoming an overnight standoff and rescue operation lasting into the next day. In particular, using RPGs, Somali militia members shot down three US Black Hawk helicopters, two of which crashed deep in hostile territory. US troops then defended, overnight, the two downed helicopters and its survivors.

Overall, this battle resulted in 19 US deaths and 73 wounded—at the time, the deadliest battle involving US troops since the Vietnam War.

The 19 fallen US military servicemen were:


Warriors, I honor and salute you.

For more information about the Battle of Mogadishu:

Tom Satterly’s ‘All Secure’ (firsthand account by a Delta operator)

If you would like to support members of the 1st SFOD-D (Delta) community through charity, please donate to the Unit Foundation.

Posted by Colin Brown at 4:00 PM No comments: